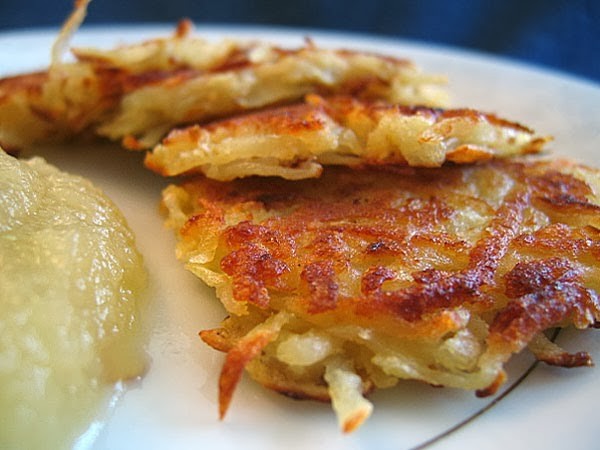 Lord knows you don't have to be Jewish to appreciate a good latke. 'Tis the season of these little potato pancake wonder, and with just a few days of Hanukkah left, we thought we'd share a recipe. Who better to ask that local celebrity chef Ric Orlando, of New World Home Cooking, which for 25 years was a trend-setting Hudson Valley culinary destination.

Seemingly simple, latkes can actually go wrong a lot of ways—greasy, rubbery, rock hard, or flacid, it is hard to nail the perfect potato pancake that your Bubby would be proud of. "One of my secrets is grating the potatoes two ways," Orlando says. "The classic regular box-grated potatoes give you the creaminess and the French-style mandolined potatoes add a lacy, crisp component that makes them addictive."

If you needed more convincing, Orlando's latkes beat out celebrity chef Bobby Flay's on the Food Network. Orlando serves his latkes with a chiptole apple sauce (YUM). Read on, or find both recipes in their original format on his blog. And if you're not in the mood for cooking, you can always make the trek up to New World Bistro Bar in Albany, where they are a permanent staple on the brunch menu.

"I was taught very early in my career to make apple sauce simple and plain first, and to spice it later," Orlando says. "If you spice it too early, you may end up with overly spiced sauce. Cinnamon, nutmeg, and clove have no place in potato pancakes. However, a little smokey chipotle heat adds a modern twist."