Come for the Crepes, Stay for the Good Vibes: Ms. Fairfax | Restaurants | Hudson Valley | Chronogram Magazine
Switch to the mobile version of this page.

Come for the Crepes, Stay for the Good Vibes: Ms. Fairfax

Newburgh’s Liberty Street revival is an ongoing love affair. Over the years, entrepreneurs with keen eyes for hidden beauty and community potential have made an impact on this historic street, buying and renovating old and forgotten buildings to share their individual visions of what the neighborhood could become. And mostly without excluding the needs and desires of long-time residents.

Once such revitalized gem is Ms. Fairfax, a casual bistro that opened at 105 Liberty Street in the fall of 2015. The restaurant’s name is a tribute to Colonial socialite Sally Fairfax, who was, if the amorous letters are anything to judge by, George Washington’s first, and possibly truest, love. Ahh, the one that got away. The building’s former business, a café called Martha, was an homage to First Lady Martha Washington, and a nod to Washington’s Headquarters, a historic site located within walking distance.

The same year Martha closed, entrepreneur Philippe Pierre showed up in Newburgh on the hunt for real estate. “I’d be on the train from the city on the way to visit friends in Beacon and wonder what was over the river,” he says. “So, I went exploring and happened upon Liberty Street, which looked like it had great potential in its old buildings.”

He saw the opportunity to create a cozy-yet-sophisticated bar and bistro where friends could gather for weekend brunch or grab a craft beer after work in an easygoing environment. Together with a partner, he opened up the eatery, and in a delightfully sassy twist named it after Washington’s almost-lover. (Pierre just opened his second Newburgh restaurant, the casual French-meets-New Orleans eatery, Mama Roux).

“I want this to feel like the neighborhood spot, where you can come as you are and comfortably enjoy good food and drinks,” Pierre says. “The idea was to be as inclusive as possible, and we certainly try to be, through our offerings, pricing, atmosphere, and hours of operation.”

For Pierre’s first foray into the restaurant industry, he was inspired by the redevelopment of Beacon’s main drag. He and a partner first opened a wine shop in Newburgh, Palate Wines and Spirits. “We offered wine tastings that had this spontaneous wine bar feeling and brought a good crowd," he says. "I thought, maybe that’s what this street needs, too.”

Though the name is historic, Ms. Fairfax’s vibe is decidedly contemporary; a rustic-modern setting with exposed brick walls, distressed metal chairs, simple slab tabletops, dim lighting in the evenings, and a laid-back staff. Pierre describes the food program as American Bistro-inspired, evolving over time. He uses feedback from the community to shape drink selections, and trusts chefs to “practically do whatever they want.”

On the succinct dinner menu, Shallot Fried Cheese is a can’t miss starter—a melt-in-your-mouth app with a crispy exterior and savory dipping sauce. Entrees include hearty, filling options like the Fairfax Burger, thick and flavorful with sautéed mushrooms and onions, cheddar, and bacon, served with either a salad or a large portion of hand-cut fries. The saucy Coq au Vin is a pan-seared half-chicken, rich with flavor, that comes with a heaping side of mashed red potatoes. “People come from far and wide for our Sopa de Costilla, a beef rib stew served in traditional Ecuadorian preparation; it’s full of flavor and it looks great with this big bone sticking out of it,” Pierre says. 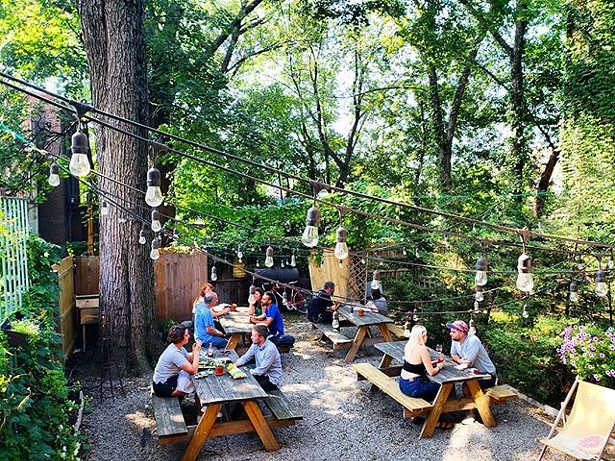 But Ms. Fairfax is famous for brunch, specifically their sweet, savory, and specialty crepes made with buckwheat flour, a technique Pierre borrowed from the French. “I grew up in Chicago but spent a lot of time in Europe and France—my family has a home in Brittany, where traditional buckwheat crepes originated,” he says. “We serve savory crepes, such as ham and cheese, crème fraiche, and others. It has a gritty, but soft texture and is naturally gluten-free.”

Wake up! It's crepe o'clock!

In the warmer months, guests can enjoy meals alfresco on Ms. Fairfax’s hidden patio, which you enter through the kitchen. ”It’s a special space,” he says. “I think it helps add to the relaxed place I wanted to create, where you could hang out and enjoy a great meal. But it’s truly been a team effort, from my partner, to staff, to other local businesses. We’re all in this together. The tide rises all boats.”