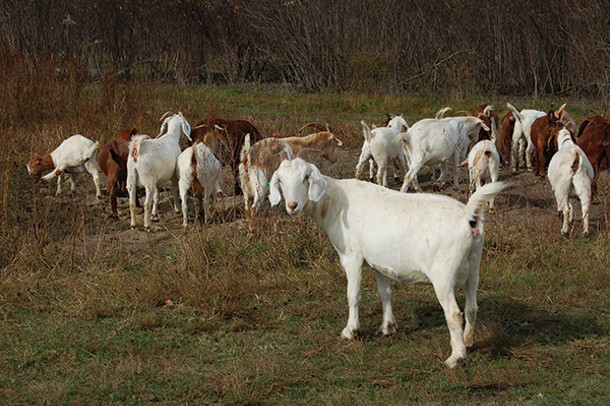 The French call it chevon, the Italians capretto, and the Spanish cabrito. Unfortunately, most Americans don't call it anything at all because we do not eat it. At least not yet. We're embarrassingly late to the party—goat meat is the world's most widely eaten meat, accounting for 70 percent of all red meat consumed.

One of the main things standing between most Americans and their first bite of goat meat is a mistaken belief that it will taste the way a mature male goat smells—stinky. But in truth, most goat meat is not at all gamy. In fact, it is far milder than lamb, with a pleasing, slightly sweet flavor. Meat from older animals can have a more pungent flavor that is actually prized by many cultures. But the vast majority of goat meat sold in the US—and here in the Hudson Valley—comes from animals under a year old who have not yet had the time to muster that distinctive, goaty musk. As a result, unless you were to specifically seek out meat from an older goat, you will find that the flavor is remarkably mild.

"Goat meat has a bad rap here in America. People are afraid to eat it, but it is the next meat, gentle to the land and delicious," says Gianni Scappin, a professor of advanced Italian cooking at the Culinary Institute of America and executive chef and co-owner of Cucina, Market Street, and Gusto restaurants in Woodstock, Rhinebeck, and Poughkeepsie, respectively.

Goat is also surprisingly healthful, packing a more powerful nutritional punch than beef, with far less fat, saturated fat, and cholesterol. And not only does goat have beef beat, but it's also higher in protein and iron and lower in fat, saturated fat, and cholesterol than pork, chicken, and lamb. Calorie-wise, goat is nearly identical to chicken, with 122 calories per three-ounce cooked portion to chicken's 120 calories. 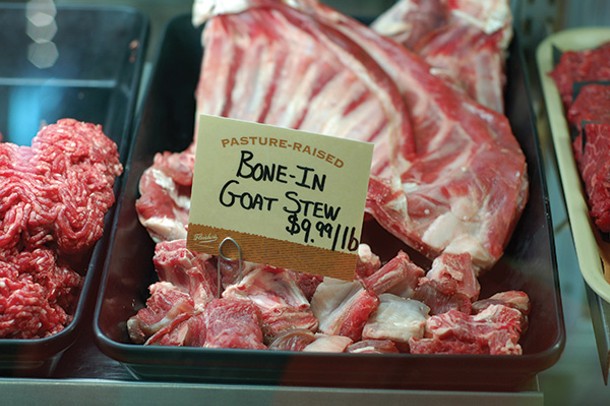 But good flavor and nutrition aren't the only reasons to like goat—their little, cloven hooves can also help reduce our hefty carbon footprint while meeting the increasing demand for local, sustainable, and humanely raised meat. Goats require far less acreage and fewer inputs to raise than cattle. One reason for this is that goats are browsers rather than grazers and thrive in scrubby brush-land on plants that a cow or sheep would not touch. "They don't really like grass—they'll only eat it if there are no better options," says Donald Arrant, the livestock manager at Glynwood Farm in Cold Spring.

More farmers are starting to use goats as an environmentally friendly way to help reclaim overgrown, disrupted pasture and tame marginal, scrubby areas. Farmer Kris Karl of Karl Family Farms in Modena has developed a particularly effective one-two punch for reclaiming former pasture and scrubby border lands. He begins by bringing his herd of Kiko-Boer goats in to enthusiastically strip young trees of their leaves and bark and happily devour problem plants like the invasive bramble rose rosa multiflora, bedstraw weed, and poison ivy. Then he moves the goats to new acreage and lets his herd of Large Black and Gloucestershire Old Spot pigs take over, rooting up anything bushy with their powerful snouts. "Within two to three years you can take a field that's completely overgrown and turn it into pasture that you can run any animal on. The goats and pigs do the bulk of the work, though we do have to get in there and pull up any stumps. It almost pays for itself since I don't have to use a lot of fossil fuels and the goats don't require a lot," says Karl.

As I stand in the windy sunshine, hastily scribbling notes about Karl's goats, one of them begins to nibble delicately yet determinedly on my jeans. I gently brush her off and she takes a few steps back to stand with her head cocked, an inquisitive look in her eyes. After a moment's contemplation, she walks back up to me and matter-of-factly resumes her oral exploration of my Levis and the tops of my rubber boots. As we continue this little brush-off-back-away-come, back dance, I start to grasp the compelling mixture of charm, stubbornness, and playfulness that makes farmers enjoy raising these animals. After five years of raising goats at Glynwood, Arrant has become a convert "My list of favorite animals to raise has changed over the years. Goats were initially at the bottom with chickens but now they're near the top—they've just got so much personality."