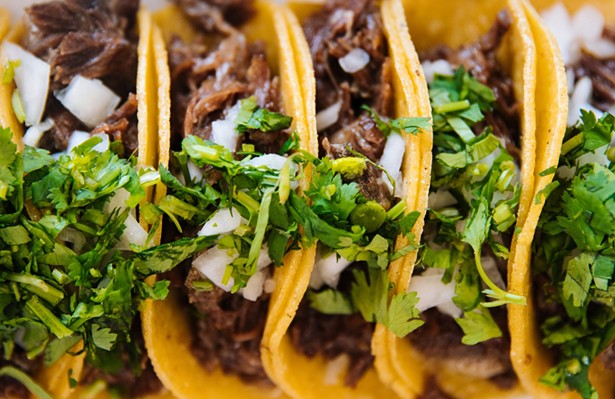 On the side of 209, in a squat rectangular building sandwiched between a tire shop and a professional building, Stone Ridge has its first taqueria. Upstate Taco opened on August 15 and it’s already doing a steady stream of business.


On an early-September Monday at 1pm, plaster-dusted construction workers crowd around one end of the counter. Blue- and white-collar workers alike, neighbors, young families, couples, and even a pair of Italian tourists all file in during the lunch rush. Co-owner Mauricio Miranda single-handedly runs the open kitchen at a dizzying pace, slapping corn tortillas on a sizzling grill. Nearby, his wife Sasha takes orders and hands out restaurant pagers.

Mauricio was born in Mexico City and raised in the state of Guerrero (roll those Rs). He immigrated to the US as a kid in the mid-90s. He and Sasha met working in the kitchen at Verbena in the city. He’s also worked at the Thalia, Luxia, L’Impero, and Union Square Cafe. “I started working in the restaurant industry as a dishwasher—I didn’t know I was going to like it,” he says. “Since then, I’ve tried to quit the industry a few times, but I just keep coming back.”


On her part, Sasha never tried to quit the industry. She was enamored with cooking from childhood and attended the CIA in Hyde Park at the age of 18. She later specialized in Italian cuisine and wine and earned a scholarship to travel through Northern Italy. Back in the city in 2002, she worked at Verbena then Raoul’s in SoHo before helping renowned Singapoearn-born Swiss chef Gray Kunz to open Café Gray in Columbus Circle.

Upstate Taco isn’t the couple’s first restaurant together. When they were in their late 20s, they opened Miranda in Williamsburg, a concept restaurant that took advantage of their respective culinary backgrounds serving up Italian food infused with Latin American flavors. (One of the signature dishes was pappardelle with slow-braised lamb seasoned with mole poblano.) They ran it successfully for a decade, but when their lease came up in 2017, the landlord tripled the rent, and they knew they had to find a new plan.


The couple moved upstate with their two-year-old to be closer to Sasha’s parents and continued working in area restaurants. During the pandemic, they would pass the little building on the side of 209 every day and wonder about it. “Everyone in the area knew it as ‘that place that was vacant,’” Sasha says. It had sat empty for years, with FOR SALE and a phone number spelled out on the side of the building in blue painters’ tape and a field of head-high weeds choking the front lawn.

They purchased it, undeterred by the shabby look and the years of abandon, and got to work. “We learned our lesson with Miranda,” Mauricio says. “We ended up losing all the investment that we did in there. Never again.” A gut reno revealed handsome post-and-beam construction, which they left exposed.


Colorful Jarritas sodas and Mexican Coke bottles line the wall behind the table seating. A white, L-shaped bar surrounds the kitchen and bright stools offer a pop of color. Outside, wildflowers surround a large deck with cherry-red umbrellas and blue bistro sets with seating for 20.

When asked about the culinary pivot from Miranda, Mauricio says. “We tried to have more fun.” He adds, “Miranda was more fine dining—that’s what we came from, working with great chefs. But when we came up, we noticed there were basically no taquerias. So we thought, “Sure let’s try it, why not? We love tacos—We love eating them, we love making them. Why not share that with the rest of Stone Ridge and upstate?”


The menu’s basic offerings repeat across different formats. There are the namesake tacos ($5.75); mulas, basically a flat quesadilla made with two round corn tortillas; and “quesaburros,” Mauricio’s quesadilla-style, folded solution to the excess tortilla at the ends of a burrito ($11.75-$14.75). The filling options for each are: pollo (chicken), cochinita pibil (pork), carne asada (steak), and grilled seasonal veggies (currently sautéed zucchini, tomato, onion, and cilantro).

For an app, start with nopales, grilled cactus paddles that that taste like something between a shishito pepper and a pickled jalapeño ($8); elote, Mexican-style street corn ($5); or a top-loaded tostada, a crispy corn tortilla piled high with chipotle braised chicken, beans, cheese, shredded romaine, crema, and cotija cheese ($6.50). Like everything else, the chips and guac are made in house ($6).


The cheese-filled mulas (mules), so called for their carrying capacity, are the Mexican answer to a sandwich. “In my hometown, we don't have sandwiches,” Mauricio says. “So instead, we just add a tortilla on each end, get some cheese, and fill it with whatever you like. We call them mulas because you can pack them with stuff.” The carne asada tacos, made with flank steak, are a stand-out on the menu—perfectly tender and juicy. You can add one of the house-made hot sauces or pico de gallo for a little punch, but with just a squeeze of lime the tacos shine on their own.

And it’s fast. The food turns out within minutes of ordering, even when the place is bumping. “The menu was designed based on our situation,” Mauricio says. “One of the things we lack is parking, so I want to make sure that we serve people as soon as we can. Sometimes it’s not possible, sometimes there is a line out the door, but we try.”


The Mirandas are sourcing as much produce as possible from the region’s producers. “That's why we called it Upstate Taco,” Mauricio says. “We were surrounded by so many awesome farmers that deserve our support.” They aim to cook with as little waste as possible. Veggie stems get turned into stock that forms the base for the rice and beans.

There will be tweaks and minor additions to the food menu in the coming weeks, but don’t expect diner-level options. The menu is intentionally contained. “A classic taqueria usually only has three, four, five tacos—that’s all they do,” Mauricio says. “We’re trying to do it a little different, but mulas, quesaburros, and tostadas is much more than a classic taqueria in Mexico City would have. When you have a huge menu, you lose control of your quality.”

On the drink front, there are four local beers are on tap for $8 a pint, and the couple just rolled out a mezcal-focused cocktail program. (There's also a full bar if that's not your thing.) “One of the things we're trying to do similar to Miranda is focusing on smaller producers—that goes for our tequilas, mezcals, and the wines that we’ll be bringing in,” Sasha says. On the non-alcoholic side, there are three house-made teas and juices—watermelon, cucumber-lime, and agua de Jamaica, made with hibiscus flowers.


Even with the roll out of the bar program, the Mirandas plan to keep their hours as is—Monday to Saturday, 12-8pm. They’re hunting for another two cooks, but until then, Mauricio will keep running the kitchen solo.