The King of Pop | Restaurants | Hudson Valley | Chronogram Magazine
Switch to the mobile version of this page.

The King of Pop

In Cormac McCarthy's postapocalyptic novel The Road, the nameless protagonist and his son come upon a ransacked vending machine, and inside it, find what is perhaps the last Coca-Cola on Earth. "He slipped the boy's knapsack loose and set the pack on the floor behind him and he put his thumbnail under the aluminum clip on the top of the can and opened it. He leaned his nose to the slight fizz coming from the can and then handed it to the boy. Go ahead, he said." McCarthy takes time with this scene; he wants us to see the bubbles jumping from the can, feel them against our own lips. Life is hard, but sometimes we're given fleeting moments of goodness—small pleasures in a 12-ounce can.

Soda has long been synonymous with good times: shared from two straws during a diner date, or in hand at a summer barbecue. But lately, soda's had a harder time of it. In 2014, Coca-Cola announced a 14 percent drop in profit. Indeed, the soft drink industry has been in steady decline for the better part of the past decade. An increasingly health-conscious population is cutting back on this particular indulgence. We all know that soda isn't good for you, but what of its cultural importance? Its sensual pleasures? Is soda doomed? Well, not if Jason Schuler has anything to do with it.

Drink More Good's 33-year-old founder and president presides behind a U-shaped wooden bar, holding a Ball jar brimming with crimson liquid. He's engaging a white-haired gentleman who has just pulled a bottle of tonic bitters off of a wall that, to the lay passerby, might look like a shrine to the old-world apothecary. "So you're a tonic fan, huh?" Schuler asks. "We got very close to finalizing this springtime tonic recipe last night. Doesn't it smell like spring? It's hyssop and lemon verbena." If you visit Drink More Good's new store on Main Street in Beacon, which opened on Valentine's Day, don't expect the conversation to end at retail pleasantries. Schuler's eager to talk shop, like how his tonic is made from gentian root, which is less likely to cause quinine poisoning than cinchona bark. A self-professed "Good-Maker," Schuler is more than just a business owner—he's the mad-scientist epicure behind its flagship product, Drink More Good hand-crafted soda syrup. 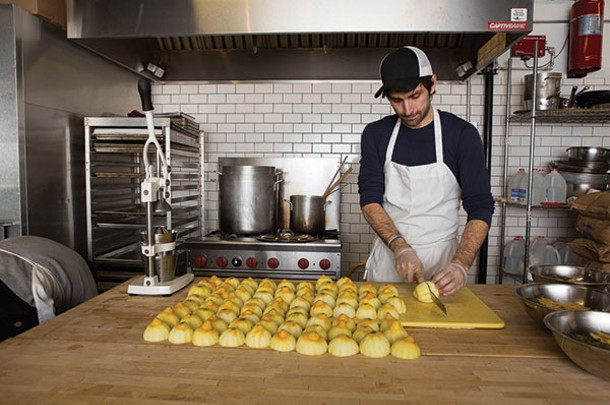 It all started with a bartending gig. In 2012, Schuler, a Hudson Valley native who grew up in Hopewell Junction, started running the cocktail program at Gleason's in Peekskill. Abiding by the tenants of the classic cocktail movement, Schuler flavored his signature elixirs using the highest-quality ingredients. To enjoy the fruits of his labor without getting a buzz on at work, he began mixing his cocktail syrups with seltzer.

Schuler wasn't necessarily tapping into a newfound passion with his impromptu fountain drinks. "Oh my god, I would crush soda," Schuler says. "I'd come home from junior high and just watch cartoons, eat pretzel Goldfish, and drink soda." But, after a seven-year stint working under Mario Del Pero of Mendocino Farms in LA, Schuler learned the hard truth about soft drinks. "Everything that's in soda is in freaking poison," he says. So, when his bar shift ended in the wee hours of the morning, Schuler would steal away to Gleason's kitchen to make and bottle his syrup. Crushing by hand only all-natural ingredients (organic ginger, local honey, real vanilla beans, and cassia bark), Schuler found a way to have his soda and drink it too.

Soon, Schuler found his first investor—his best friend—and with just $2,000 and a dream, Drink More Good was born in December 2012. By April, Schuler's products were hitting local farmers' markets. In May, Drink More Good opened a 200-square-foot storefront in Beacon where Schuler sold his ginger ale, root beer, and cassia kream syrups along with a small selection of fair-trade herbs and spices, loose-leaf tea, and craft bitters. "The town really welcomed it," Schuler says, and in just a few months, it became clear that Drink More Good needed a bigger space.

In 2014, Drink More Good moved to its new digs at 383 Main Street, a 2,000-square-foot storefront with an industrial kitchen in the back that Schuler designed and built himself. The open-concept space features a sodastream-equipped bar and tables set against wide people-watching windows facing Main Street. Hot tea service is available, and patrons are invited to bring their own food (Eat More Good is in the works, but not yet an active arm of the business). The walls are outfitted with sleek, product-themed alcoves: 15 blends of organic loose-leaf tea, 72 fair-trade herbs and spices, 50 different varieties of bitters, and Drink More Good soda syrups on display with the mortar and pestle that are used to make them. In addition to opening the new store, Drink More Good has landed 60 wholesale accounts between Albany and New York City. By the time this article is published, it will have launched accounts with 31 Whole Foods in the Northeast. 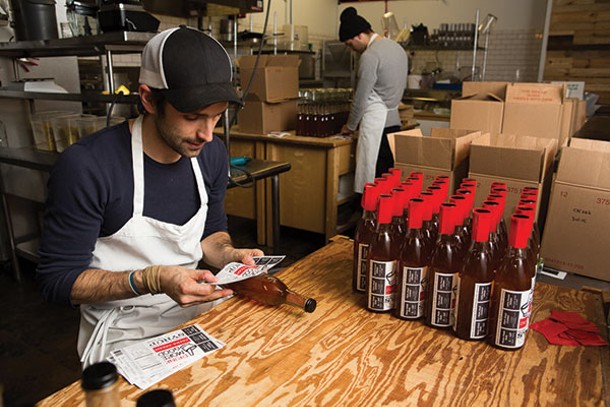 Schuler doesn't only want people to drink more good; he also wants people to do more good. "Our mission is literally to make the world a better place," Schuler explains. "We have a triple bottom line: people, planet, and profit." He's not just blowing smoke, either. Before making his first dollar, Schuler contractually obligated $4,000 every year to Generosity.org, a nonprofit working to end the clean-water crisis in developing countries. In its first year of business, Drink More Good fully funded a water well in Cabaret, Haiti. Last year, Schuler organized the 24-hour Goodmaker Project, a blitzkrieg community fundraising effort that raised more than $17,000. After covering expenses related to the fundraiser (including the creation of a documentary about the project), over $14,000 was donated to Generosity.org.

Drink More Good gives back to the local community, too. Before building his own, Schuler had a hard time finding a large-scale production kitchen in the Hudson Valley. Understanding the unique hurdles that food start-ups face, Schuler decided to rent out his kitchen to community food producers at more affordable rates than what most incubator kitchens charge ($35/hour vs. Schuler's highest rate of $18.75). When he's not using it himself, Schuler opens his kitchen to The Beacon Bite food truck, Beacon-based bakery The Darling Kitchen, paleo food producer Primal Source, and Cold Spring's gourmet popsicle gurus, Go-Go Pops. People are encouraged to take tours of the open-concept kitchen (accessible from the storefront via a short hallway) while local food producers are at work. "People can learn about where food is coming from, how it's prepared, and who's making it," says Schuler. Eventually, Schuler wants to create an incubator program, which would help food start-ups get to market.

Though Drink More Good has had a lot of success in a little time, Schuler is not the sit-and-savor-it type. "It's pretty surreal where we are from where we started," he says. "But you can't get caught up on that. You just got to keep going forward." So what lies ahead for the small beverage company that could?

"I want to be a global brand," says Schuler. Global impact through local success isn't just central to Drink More Good's mission, but it's also an important part of Schuler's business model. "I want to take the model that we built and stamp it into other regions." Schuler's an idealist, but he's also a realist with an impressive track record for getting things done. When he says Drink More Good will be in Los Angeles before the end of this year, I'm inclined to believe him.

No matter how high his ambitions soar, Schuler's vision for the company has humble roots. "We should care about each other more," he says. "We're just trying to play our part in that. People want to do good." It's nice to know that—when you're drinking More Good—the glass is always half full.

Drink More Good launches its Chef's Dinner Series on April 19. To access tickets, sign up for the Drink More Good newsletter. Two fundraisers will be held every year to support Generosity.org: a springtime gala and the Goodmaker Project in the fall. (845) 797-1838; Drinkmoregood.com.