The Pig Dies at Noon | Recipes | Hudson Valley | Chronogram Magazine
Switch to the mobile version of this page.

The Pig Dies at Noon

Last summer a friend e-mailed me, asking, “Do you know where a friend can get a pig?” and I directed her to Richard at Northwind Farms, where they raise a variety of first-rate pastured meat. In exchange for the pig hookup, I got to attend a special sort of barbecue: the kind that begins with a live pig, and ends with dinner. Tate, our host, thought it would be a good idea if all of his hipster Brooklyn foodie pals connected with their meat in an intimate and direct way, seeing exactly what it is that goes into bringing an animal to the plate. It was an interesting idea, and the prospect of meeting some nice people while soaked in pig’s blood seemed like a no-brainer. Having been a vegetarian for 18 years, since returning to omnivory I have made a point of only eating properly raised and slaughtered animals. My apprehensions at being involved in the hands-on execution and butchering of a pig were outweighed by my curiosity and conviction that this sort of activity is exactly what constitutes walking the carnivorous walk.

Richard and the pig arrived, and he described how the pig would meet its end. He slipped a couple of ropes around the animal. Tate loaded the .22, and they worked out who would stand where. The was a bit of tumult as the animal came off the back of the truck, and I remember thinking for a moment as Richard yelled, “Shoot it now! Shoot it now!” that there was a real chance that the whole operation could go badly off the rails and end up with us chasing the pig through the woods while she became more feral by the minute. But Tate shot her twice in the head in quick succession, and that was the end of the pig. She twitched a few times as they dragged her body into the woods to a plywood platform Tate had built for butchering, where children or the squeamish wouldn’t see it. There was a lot of blood.

We lifted the pig up onto the platform, and Richard cut its throat to bleed it out into a bucket. It’s surprising how deeply and easily a knife will cut into a dead animal. Cutting both back legs between tendon and bone, he threaded rope into those holes and we hoisted it up in the air for gutting. It’s hard to pinpoint exactly the moment at which the pig transformed from an animal into meat, but by this time it had fully undergone the change. Richard guided Tate through the gutting, beginning with making deep cuts all around the anus to separate it completely so that the intestines could drop out through the opening in the belly, and avoid any rupturing and unpleasantness. He did a surgically gentle job, and the guts spilled forth efficiently. The lack of blood made for an oddly clinical process; for the first time I understood what it is that surgeons do, and how they tell things apart. Richard got deep into the cavity with the knife to liberate the heart and lungs, which meant the end of the viscera. Lungs are firmer than you think. The heart was warm.

We all put on ponchos, kindly provided by our host, to protect our clothes from gory spatter, and skinned it, per Richard’s instructions. He left, since he had better things to do, and because from this point on we had some inkling of what we were doing. This was due in unreasonable proportion to the anatomy classes I took back in art school, the many times I’ve taken various animals and parts thereof apart into smaller pieces, and my fervently held belief that confidence and momentum can substitute for actual skill and knowledge in a pinch. I got the hams and shoulders off really easily, though they looked a bit ragged. Tate used a hacksaw to separate the ribs from the spine. It was work, but remarkably easy and calm. We talked and cut and the pig came apart into recognizable pieces quite quickly. The heat of life lingered in the muscles. It was very matter-of-fact: neither overly jocular nor traumatic. Just real. I’m not going to say that we did a great job—both definitions of “butchered” were appropriate—but there was precious little left on the spine when we were done. And all the rest was in a cooler with ice, ready to take up the hill to the kitchen and grill. We strategized as we disassembled the carcass, thinking ahead to what should get cooked when and how, so that we could actually turn a pig into dinner in a timely manner. One of the things about pigs is that they do best with time-intensive preparations, ranging from two-day pulled pork to one-year prosciutto. So we thought a bit about how to make the most of a highly foreshortened window. Sue had brought a miso glaze for ribs, and was pretty excited to get at them.

We lugged the big blue plastic tub full of rough meat and ice up the hill, along with all the knives, beer bottles, and buckets of skin and guts, and got to work making dinner. First up, Matt and I ground various random boneless bits into sausage, using copious garlic, thyme, lemon juice, and fennel. It’s what there was, and the result was tasty enough, if not emphatic. Since cleaning out the intestines for sausages was a job too ambitious for the occasion, we simply made patties and Matt grilled them. While he did this I put the braised cabbage and baked beans I made earlier into bowls and scrounged up serving utensils for them. Corn bread, coleslaw, and other goodies appeared on the table. I took the shoulders, rubbed them with a spice blend I had brought, and got a decent char on them, then I cut the meat off the bones and put it in our pressure cooker along with smoked chicken stock (which I also brought) and some various spices and condiments from their fridge. After an hour, I strained the liquid, pulled the meat apart, thickened the liquid by reducing it with ketchup, mustard and some decent store-bought barbecue sauce, and then mixed it all together. We took both slabs of ribs and put them in a 200˚ oven, wrapped in foil. After a couple of hours, we took them out and finished them on the grill. Sue garnished hers with her glaze and chopped scallions, and I finished mine with pulled pork sauce and scallions that I stole from her bowl. The pressure cooker and oven allowed us to enjoy persuasive versions of slow-cooked classics.

The majority of the group stayed in or behind the house during the slaughter and butchery, splashing in the pool and tending to the many children at hand, so when things resembling food showed up, they all got very attentive all of a sudden. What was most interesting was the clear division between those of us who wanted to be present for the entire process and those who just wanted to eat; there were four or five of us who did all of the messy work of turning an animal into dinner, and around 20 who ate. Now I understand that watching their dinner get two in the head, mafia style—with all of the attendant blood and twitching and guts—might be off-putting to some, but I was surprised that more people didn’t want to see a bit more of the butchering, or at least talk about what went in to bringing the meal to fruition. As it was, nobody at all in the house seemed to have any interest at all in what we were doing, let alone a desire to learn or hear about what we did. Having said that, the large number of small children in attendance may have had more than a little to do with the lack of greater audience participation. There was no praise or thanks for the animal, though, or any public acknowledgment that this dinner was any different from an ordinary barbecue, which I thought was strange. 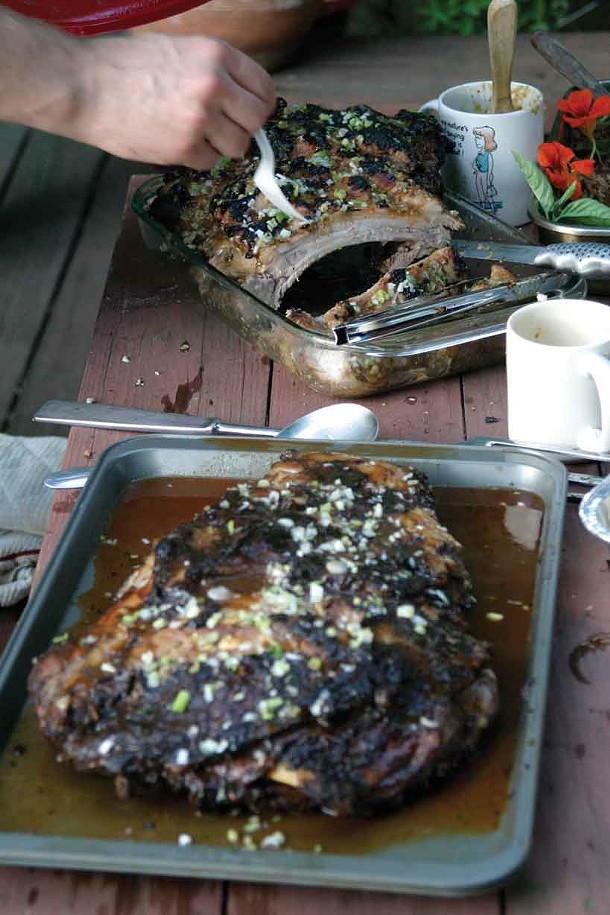 It sounds like an idyllic summer garden party, right? It was lovely. And we few (we happy few, we band of butchers) all agreed that it was way less horrible than we had imagined; it was interesting work and we bonded over it. But the stated desire—to connect people directly with the nature of meat, and how animals become food—didn’t really reach beyond those of us who were already sold on the concept. It clearly takes more pushing to get nongeeks over that experiential hurdle, but I feel that it’s important to try. Meat is food that comes at a particular cost, and though it is extremely good to eat, people should be fully cognizant of the cost/benefit ratio when they eat it. Most meat eaters should eat less meat anyway, and those who really can’t deal with watching the death and dismemberment of an animal should reconsider their carnivorous status. Moving the life and death of most food animals far out of sight of most peoples’ lives has robbed us of this much-needed perspective, and also removed certain rituals from our meals. Being mindful of the beings that we eat when we eat them has been one such casualty. This event was a welcome attempt to redefine nose-to-tail eating upward, toward owning the whole animal and its dispatch and consumption. This kind of meal should be more common, since it’s the way humans have eaten from since we became human until very recently.

The original blog post this article is excerpted from can be read at www.acookblog.com. under the “Best Of” header. Caveat lector: The blog contains graphic images of a pig being shot, bled, and butchered. If you’re a meat eater, you should view them.